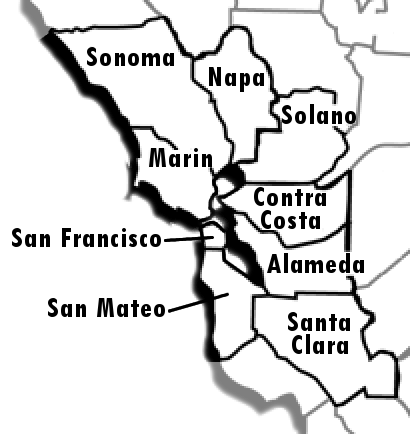 Traditionally, the San Francisco Bay Area has consisted of the nine counties shown to the right.

Sitting at nearly the geographical center of the bay area is the city and county of San Francisco. Serving as both the urban and financial center of the region, it is the northern home of the Pacific Stock Exchange, as well as the home of Giants baseball and 49er football.

The region north of the Golden Gate consisting of Marin, Sonoma, Napa, & Solano counties forms the sub-region locally known as the North Bay. Still predominantly rural with an agricultural focus, the North Bay is home to dozens of wineries and vineyards.

The East Bay, consisting of Alameda and Contra Costa counties, is home to both A's baseball, Raider football and Warriors basketball, as well the Oakland International Airport. Ranging from the relatively urban west to the decidedly suburban and at times rural east, it is home to both colleges (Mills) and universities (UC Berkeley and California State University East Bay) of note, and substantial areas of parkland such as Mount Diablo State Park, and Tilden.

Moving down the coastline from San Francisco is San Mateo county, locally known as the "Peninsula". Home to the Half Moon Bay Art and Pumpkin Festival on the coast and the SF International Airport as well. Many of the cities serve as wealthy suburbs to San Francisco and Silicon Valley businesses.

While the South Bay primarily consists of Santa Clara county, most communities are associated with the South Bay in connection with the Silicon Valley, home of the present day Tech Revolution. The northern part of the county is home to such schools as Stanford University. The dominant urban center of San Jose also includes the San Jose International Airport (named in honor of Norm Mineta) and San Jose State University. San Jose is also the home of the Sharks hockey team.

Retrieved from "https://sanfrancisco.fandom.com/wiki/SFBay?oldid=3903"
Community content is available under CC-BY-SA unless otherwise noted.