Bordered by Interstate 80 on the West, and Wildcat Canyon Regional Park along the South, its legal boundaries tend to be somewhat fuzzy as is often the case with unincorporated communities. It's two major roads are San Pablo Dam Road,which goes west to east from San Pablo to Orinda. and Appian Way, which branches off San Pablo Dam Road and goes north and west before going into Pinole.

A centerpiece of the El Sobrante calendar is the annual El Sobrante Stroll in September, when several blocks of San Pablo Dam Road, from about El Portal to Appian Way are blocked off to traffic. Not withstanding the lack of formal government, there is an advisory council known as ESMAC that meets on a monthly basis at the local county public library. 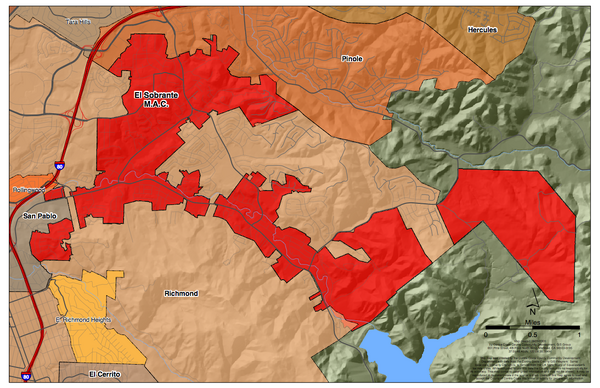 Knowing where El Sobrante begins and ends can be something of a mess as the area is not entirely contiguous. It is not for nothing that El Sobrante is sometimes referred to as the "Leftovers" as it is unincorporated land that has never been incorporated into any of the surrounding communities of Richmond, San Pablo, Pinole and Orinda.

Retrieved from "https://sanfrancisco.fandom.com/wiki/El_Sobrante?oldid=4327"
Community content is available under CC-BY-SA unless otherwise noted.